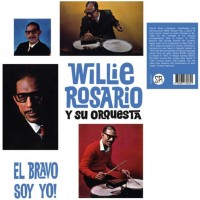 Puerto Rican composer, bandleader and percussionist Willie Rosario was a giant of Latin music, known as Senor Afinque or Mr. Tight for the strength of his musical arrangements. Born in Coamo in 1930, Rosario had already formed the Coamex band, prior to his emigration to New York in 1947, where he played in various orchestras, forming his own band in Spanish Harlem in 1959 and also presenting a Spanish-language music show on radio station WADO. Signing to Alegre in 1962, he began touring widely, the label issuing this sought-after debut in 1963, mixing covers and original, the hot salsa here features the dulcet tones of lead singer, Frankie Figueroa.