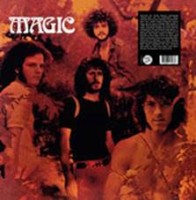 Spanning the divide between backwoods swamp rock and US psychedelia, Magic evolved from Lansing, Michigan-based band, Next Exit, which singer/songwriter Duane King and his bassist brother Nick joined in 1968. The following year the group became Magic and things stepped up a gear with the introduction of lead guitarist Joey Murcia, a Miami native that was a session player for TK Records. The band moved to Miami and became the first white act on TK, their debut album released on their own Armadillo label. Returning to Michigan in 1970, Motown producer Scott Regan brought them onto the Rare Earth subsidiary for this excellent self/titled LP, with none other than Stevie Wonder playing piano on three tracks.