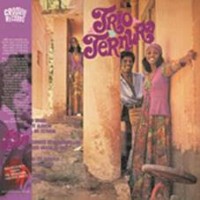 Another killer reissue after the storm. we are back with this TRIO TERNURA, originally released in 1971 in Brazil. This time we included a OBI with more information.CBS had a fantastic production team, including the likes of Raul Seixas and Hélcio Milito (Tamba Trio), responsible for releasing excellent artists over time.This record by Trio Ternura is one of those examples - the 2nd LP by this family vocal group. It is amazing that they only made a few LPs, but this one features beautiful tracks like Sol Quarenta Graus and Sempre Existe Alguém. Both of these could sit alongside any Stax or Tamla Motown record of the same era. And the funky groove of Uma Sombra Na Estrada? I am 3 tracks in and I'm in love with this record!This is truly one of those undiscovered gems in Brazilian music! Raul Seixas really did a marvelous job!

Haxixins, Los
Under The Stones