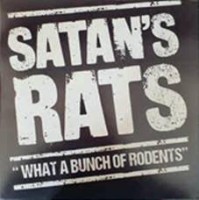 Satan's Rats
What A Bunch Of Rodents

Satan's Rats formed in Evesham, Worcestershire in January 1977, with an average age of just seventeen.Songs like the anthemic 'Year Of The Rats' about the demise of the old fart groups, their appearance at the Birmingham Punk Festival and support to the Sex Pistols at the Roxy soon saw the band build a large following and inevitably drew them to the attention of record labels.Their first demo earned them a deal with DJM Records. Hardly a punk label, home to Elton John and the enigmatic Rikki Sylvan who produced their first two singles.The first single 'In My Love For You' was released in 1977. Bob Geldof reviewed in the NME and slagged it off. The second single 'Year Of The Rats' released early in 1978 fared no better, sinking without a trace.For their third single 'You Make Me Sick' they had Vic Maile (Dr Feelgood/Fruit Eating Bears) as producer. He managed to capture the anger of the band perfectly and this single, released in 1978 was undoubtedly their finest moment. Julie Burchill reviewed it in the NME, she hated it.Later that year Paul Rencher quit, the band recruited vocalist Wendy Wu, changed their name to The Photos, signed to Epic and had a hit album.All three Satan's Rats singles are highly prized collectors' items and have been heavily bootlegged on punk compilations, one series even naming itself 'Year Of The Rats'.'What A Bunch Of Rodents' is a vinyl compilation of their singles and six studio recordings unreleased at the time and contains an insert with sleeve notes from Steve Eagles and photos and memorabilia.

Gino & The Goons
She Was Crushed

Betty And The Werewolves
David Cassidy