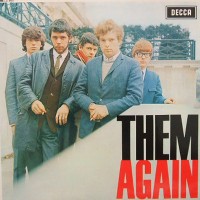 The group's second and, for all intents and purposes, last full album was recorded while Them was in a state of imminent collapse. To this day, nobody knows who played on the album, other than Van Morrison and bassist Alan Henderson, though it is probable that Jimmy Page was seldom very far away when Them was recording. The 16 songs here are a little less focused than the first LP. The material was cut under siege conditions, with a constantly shifting lineup and a grueling tour schedule; essentially, there was no "group" to provide focus to the sound, only Morrison's voice, so the material bounces from a surprisingly restrained "I Put a Spell on You" to the garage-punkoid "I Can Only Give You Everything." Folk-rock rears its head not only on the moody cover of Dylan's "It's All Over Now, Baby Blue" but also the Morrison-authored "My Lonely Sad Eyes," but the main thrust is soul, which Morrison oozes everywhere - while there's some filler, his is a voice that could easily have knocked Mick Jagger or Eric Burdon off their respective perches.

Them
The Angry Young Them

Burdon, Eric & The New Animals
Yes I Have Been Experienced