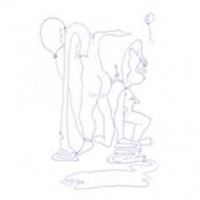 Repress!!!Debut album by The Green Child, featuring Mikey Young (Eddy Current Suppression Ring, Total Control, Lace Curtain) and Raven Mahon (Grass Widow, Bridge Collapse). Some of the lyrical content and the band-s name was inspired by Herbert Read-s 1935 utopian, communist, sci-fi novel called The Green Child. With such a choice name, it's no surprise that The Green Child draw their sound from an illusory past as much as they stalk into pastures new. Broadly retro/futuristic in scope, verdant acres of lushly evocative synthesizers and blippy drum machines underpin most of their upbeat yet decidedly uncanny songs. Raven's calmly scenic and measured vocal flits like a will/o'/the/wisp throughout the tracks, proffering a guiding hand as she walks us through the often eerie, electronic concoctions.

Dead Milkmen
Welcome To The End Of The World