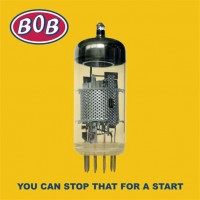 Bob were an English indie band who formed in 1986 and released a few singles that featured heavily on John Peel's Radio 1 show. 'You Can Stop That For a Start' is an album that the band recorded in 1992 but never released. The album comes with additional tracks in the form of demos recorded between 1988 and 1994. On Optic Nerve.