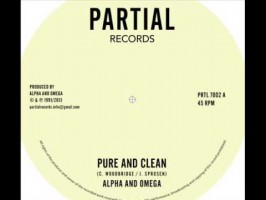 First appearing on A&O's album 'King and Queen' in 1991, 'Pure and Clean' became an instant classic, with Jah Shaka cutting the track and running it on dub. Fast forward to 2013, Partial Records release it on 45 for the first time backed with one of the Shaka-championed dub cuts, it remains the best fastest selling 7" on Partial. 300 only copies.,