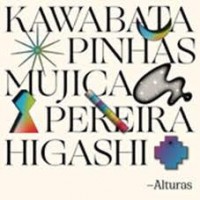 For the first time together members of Acid Mothers Temple, Heldon, Perujazz and El Polen.When Acid Mothers Temple and Richard Pinhas visited Lima for the first time, in November 2017, to participate in the experimental music festival "Integraciones", Luis Alvarado, the director of Buh Records and curator of the festival, summoned the Japanese and the French musicians to Manongo Mujica's studio and invited Juan Luis Pereira (El Polen) to join them for a recording session. The result was this album which finally comes to light, and where a variety of instruments and sensibilities are combined. The guitar sound of Kawabata, the leader of Acid Mothers Temple, merged with that of Pinhas, the leader of Heldon, creates a dreamlike atmosphere, which is supplemented with Mujica's Indian bells and drums, Pereira's pututos, moceño, violin and charango, and the cosmic electronic sounds of the classic Roland synthesizer played by Higashi, from Acid Mothers Temple. Everything flows between quietness and abstraction, an atmospheric music that gives way to inspired melodic developments, which are fused with sounds coming from the Andean tradition, as well as with the classic textural and melodic explosions courtesy of Kawabata. All this is enhanced by the meticulous mixing and post-production work done by the Peruvian artist Ale Hop.ALTURAS Heights is edited in vinyl format and is destined to become a milestone in the catalogue of Buh Records, a label that has also released albums by El Polen, Acid Mothers Temple and Manongo Mujica.TRACKLISTSIDE AA1. IntroducciónA2. CampanasA3. IntermedioA4. AndinaSIDE BB1. Super AndinaB2. Charango