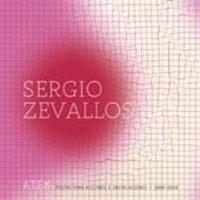 ATEM: PIEZAS PARA ACCIONES E INSTALACIONES (1999-2019)For the first time an album that brings together the compositions of the great visual artist Sergio Zevallos.Sergio Zevallos, a Peruvian artist based in Berlin, has been active since the 1980s when he was a member of the Chaclacayo Group, one of the most radical artist collectives in Peru, dedicated to performance art. Since then, Zevallos has been interested in composing his own soundtracks, writing scores with invented notation, working with recitation of texts and recordings of people talking, elements that he later used as raw material for his compositions.Zevallos' work has been developed in a multidisciplinary field, between drawing, performance and sound art, with a clear interest in setting iconoclasm and nonsense against the languages of power. Sergio Zevallos - ATEM: Pieces for actions and installations (1999-2019) compiles, for the first time, works in the field of sound, both soundtracks for various performances such as "Fragmentos" and "Atem", which are based on the montage of vocal sounds and noises, and "Cello", a musical composition for that instrument. In them, dissonance alternates with melodic work and experimentation with loops and recordings. "CHTP No. 3" is a work akin to the experiences of sound poetry. "Callejón Oscuro", on the other hand, documents the complex vocal sound textures achieved by Zevallos, in the manner of Radio Arte's compositions, for his sound installation of the same name.Sergio Zevallos - ATEM: Pieces for actions and installations (1999-2019) is released on vinyl LP, edition of 300 copies, and includes photos, drawings and notes written by Zevallos himself. This album is released by Buh Records with the support of Proyecto AMIL, who have joined efforts to develop a collection dedicated to presenting fundamental Peruvian works that operate at the borders of visual and sound art. TRACKLISTSIDE AA1. FragmentosA2. AtemA3. CelloSIDE BB1. CHTP N°3 B2. Callejón Oscuro Pt1B3. Callejón Oscuro Pt2