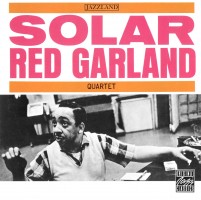 Red Garland, one of the most respected pianists in Jazz. Close collaborator of saxophone giants such as Charlie Parker, Lester Young, and Coleman Hawkins, and member of Miles Davis classic quintet. 'Solar' consists of a solid quartet session held in NY on January 30, 1962, and originally released on Jazzland Records in the same year. Garland's quartet consists of Les Spann on guitar (and flute on two tracks), Sam Jones on bass, and Frank Grant on drums. A total of eight tunes split between originals and some underplayed standards such as 'Where Are You?' and 'The Very Thought of You'.

Turrentine, Stanley
Up At Minton's (2lp)

Ellington, Duke
Stomps, Rags & The Blues I Love To Sing