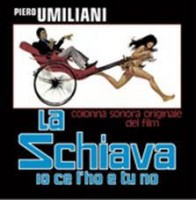 Thanks to combined efforts of Cometa Edizioni Musicali, Beat Records and Four Flies Records, finally one of the most iconic and long-awaited works of Maestro Piero Umiliani emerges from the vaults. Recorded in September 1973 in the Ortophonic studios in Rome, the soundtrack of the movie directed by Giorgio Capitani - with Lando Buzzanca and Catherine Spaak - has been for many years one of the most sought after titles of the composer, whose original LP (released on Vedette) has now reached the status of holy grail among the record diggers around the world. His music is the quintessence of the brilliant 70s Italian comedy sound, an unmistakable flavor now carved into our imaginary, samba-bossa rhythms, funk guitars strings with airy and dynamic melodies and above all those super light and always surprising choral parts (performed by the influential vocal group I Cantori Moderni, led by Alessandroni, and the unmistakable Edda Dell'Orso). We've been able to trace the original master tapes of the complete recording sessions, in order to sort out a number of 23 unreleased takes, which highlight the eclecticism of the composer. Enriched with personal memories from Piero's daughters Alessandra and Elisabetta who contributed with extended liner notes - this is a crucial re-issue in the ever-changing career of the Maestro.