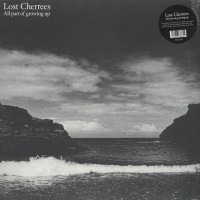 The first ever official reissue of this album by UK anarcho/punk band Lost Cherrees, originally issued in 1985 by the Fight Back label. This is an edition of 500 copies on 180-gram vinyl, with reproduced artwork and an insert. The music combines anarcho vibes, rooted in the Crass (band and label) scene, with post/punk end reggae elements. As far as the latter goes, think Mad Professor and The Ruts.

Lost Cherrees
All Part Of Growing Up