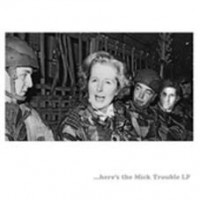 Mick Trouble - a nearly man of post punk pop. A contemporary of Swell Maps and Television Personalities, if everything stayed on track he would have enjoyed the kind of success and acclaim given to Elvis Costello. That, unfortunately, is not not what happened. He disappeared before he was supposed to record a session for John Peel thus ending a promising career. The original tape for Here's The Mick Trouble LP - lost since 1980 - was found in a cookie jar in Trouble's basement.