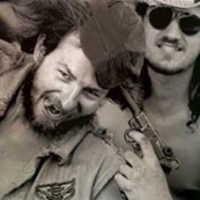 It all started in Stockholm, way back in the 90>s. Four bored kids decided to start a band.The first songs heard live, were mostly Misfits covers and some own punksongs. After a few years in the reharsalstudio, and a bunch of live acts. They got hooked up by Big Brothel.Right now the four guys are touring more than ever. So when they visit your town, get your fat ass to their magnificent show!! All songs made by Sons of Cyrus and produced by Chips Kiesbye. Recorded at 44traxx Studio, Stockholm by Stefan Boman.