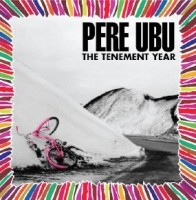 Presented on clear vinyl is a reissue of 1988's 'The Tenement Year', the sixth studio album from U.S. art-rock icons Pere Ubu and the first that they released following a few years of hiatus in the mid-80s. Featuring four of the core members from the lassic' line-up of Pere Ubu's first iteration, the album formed the basis of the band's second life.