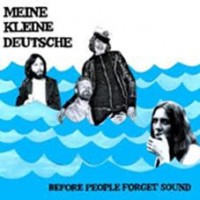 Meine Kleine Deutsche are a phenomenon. Founded in 2002 by Maria Mia Johansson and Patrik Boman, they are sort of the godfathers of Scandinavian Electroclash. It is a well known fact, that the art of computer-aided music-making is flourishing in Northern Europe, at least since the major success of The Knife or Aavikko. With their latest effort "Before people forget sound", the third album of the Stockholm-based band is available now. It took three years to puzzle-over and fine-tune the sound, to draft and discard and to recreate. Furthermore they called for back-up bringing in Max Groundstroem (Sons of Cyrus, Holiday Fun Club) on guitar and Topi The Kat (Sons of Cyrus, Front de Boeuf) on drums. While the first two records were still dominated by a fury

Brooms
In Your Face