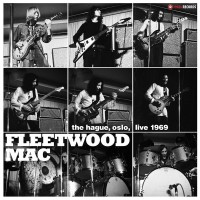 Following the success of Live In Helsinki, this LP continues our documentation of the band's 1969 prowess, showcasing live sets from Oslo and The Hague recorded for Norwegian and Dutch TV respectively. Of the eleven tracks, seven were never recorded on a Fleetwood Mac studio LP. They range from Danny Kirwan's mournful One Sided Love through to an ebullient Tallahassee Lassie. The final track is a lengthy Rattlesnake Shake which, as Mick Fleetwood explains in the sleeve notes, indicates the more improvisational approach the band would adopt. This LP captures the band as they evolve from a straight blues band towards something more innovative. All tracks recorded at Congresgebouw, The Hague on 28.02.69 for Dutch TV, except side two tracks 3-6 recorded at Njardhallet, Oslo on 03.11.69. Despite careful remastering, the tracks from The Hague tend towards the trebly< the Oslo tracks are of better quality but are not soundboard recordings.