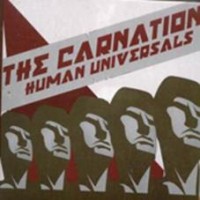 On "Human Universals" The Carnation are leaving their new wave/infected sound for something rather different. While the harsh vocal delivery remains intact in places, the overall impression of the album is one of development. With the inclusion of synthesizers, dance grooves and Christian Bergman's melancholic/psychedelic slide guitar parts the band has certainly come a long way since their debut with "Gothenburg Rifle Association".The new record begins in a stylish way with the delayed drums of soul/pop effort "Label slaves", before the punky guitar and bass of "Thursday's kid" kicks in. These are followed by a list of songs that combines anger, hate and frustration with political awareness and hope for the future. When singer Eric Obo barks about terrace aggro in "Where's the violence_", it's actually hard not to believe him. After a staggering 42 minutes the final chord of the 13th and last song "On the losing end" fades out and the listener is guaranteed to have been affected in some way or another.

Magnetic Fields
Love At The Bottom Of The Sea