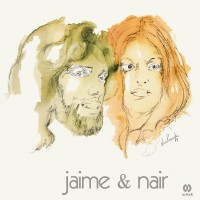 Back in stock! The self-titled debut by the duo Jaime & Nair is a revelation of all sorts. Released in 1974 on CID under the influence of albums like "Clube Da Esquina" it is an expressive album full of charm through a gesture of swing. It shows an overall dreamy lullaby vibe with subtle touches of Brazilian folk and features well-known artists such as Wilson Das Neves, Orlandivo or José Roberto Bertrami as studio musicians.The outstanding and largely hailed song 'Sob O Mar' brings us back to a pure Brazilian soft-bossanova-beat adorned by luscious orchestral arrangements. It became a popular DJ tune for those in the know after being comped in the fantastic "High Jazz" series in the early 2000s, gaining this album grail status among collectors worldwide.An essential addition to any serious Brazilian music collection.TRACKLISTSide A1. Sob O Mar2. Nao Valia Tanto3. Samuel Arcanjo: Anjo4. Névoa Seca5. A Bica De Chororó6. Nigue Ninhas E Coco Do NorteSide B1. Das Minas2. Olhos Para Sao Paulo3. Reino Das Pedras4. Sabiá, (Diga Lá)5. Boi-Lê-Lê6. Zabumba Do Nego