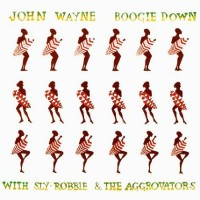 Wayne, John (with Sly, Robbie & The Aggrovators)
Boogie Down

The Jamaican dancehall artist known as John Wayne was born Norval Headley in 1962 in rural St Elizabeth. He first reached the studio in the early 1980s, recording "Racket Girls In Jackets" for the Root Out label, where you can already hear the fearsome skill unleashed by Wayne at the microphone, showing why he was a favourite of top-ranking sound systems such as Black Scorpio, Kilimanjaro, Jammy's and Studio Mix. In 1983 he travelled to New York, appearing on a 12-inch of Sugar Minott's "Jamming In The Street," while the Hoo-Kim brothers paired him with Johnny Slaughter for "Rain Fall, Sun Shine." That same year, Bunny triker' Lee produced his only album, titled Boogie Down and issued by Vista Sounds in the UK. Because Striker had access to such killer rhythms, the album is a real treat. Opening track "Jailhouse" rides a slow "Queen Of The Minstrel" recut, patterned similar to Welton Irie's "Army Life", the aptly-named "Heavy Rhythm" recounts his skill at rhyming, "African Princess" praises black women over a sparse recut of "No More Will I Roam," "Bend Your Back" speaks of various aspects of ghetto life, before Side One closes out with title track "Boogie Down" on the immortal "Late Night Blues" rhythm. On Side Two, "Bubble With Me" uses a "Drifter" recut to give a massive salute to Bunny Lee and the engineer Professor at King Tubby's studio, "Too Greedy" rides a "Real Rock" recut while the self-referential "Go John Wayne Go" rides Johnny Osbourne's great "Yo Yo," the result so appealing that it gained airplay on John Peel's influential radio show in England (and Wayne keeps up the pressure on "Murder Style" and closing number "Me Deep" too). Wayne scored a massive hit in 1985 when Jammy placed him on "Sleng Teng" for "Call The Police" and he went on to record for George Phang, King Tubby and Witty Henry before becoming a producer himself. Sadly, John Wayne died of kidney failure in 2014, so we are fortunate that Boogie Down captured the man at the peak of his powers.