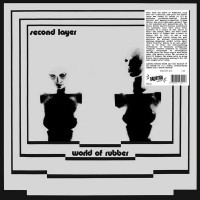 LIMITED RECORD STORE DAY 2020 EDITION OF 500 COPIES ON GREY VINYL, DOUBLE/SIDED INSERT AND 3 BONUS TRACKS. Post-punk duo Second Layer was formed in London in 1979 by southpaw guitarist&vocalist Adrian Borland and bassist & keyboardist Graham Bailey, who would both gain greater fame in the somewhat more mainstream act, The Sound, Borland has previously been active in Wimbledon punk trio The Outsiders, which released two albums and an EP on their own Raw Edge label before disbanding. Second Layer's heavily synthesized and dystopian Wold wave' sound first surfaced on a couple of EPs, issued on their own Tortch label, and when debut album World Of Rubber was released on Cherry Red in 1981, it was a very different beast indeed, being far more abstract, the minimal instrumentation masking occasional morbid lyrics about "Black Flowers," bodies in an open grave and, on "In Bits," the disintegratingpersonality of Borland's protagonist, "Japanese Headset" subjected an unknown foreign soundtrack to stereophonic effects. Since The Sound signed with major label WEA shortly after the released of World Of Rubber, the album ended up being Second Layer's swansong, making it all the more sought after today.