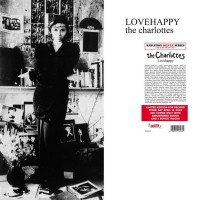 Hailing from the small, conservative market town of Huntingdon in Cambridgeshire, The Charlottes rose from the ashes of a short-lived band called The Giant Polar Bears, before that,bassist David Fletcher had been in Red Over White, guitarist Graham Gargiulo had played in Mithrandir while drummer Simon Scott would eventually end up in Slowdive, early vocalistJohn Lindsell was replaced by Petra Roddis. Their debut single, "Are You Happy Now," issued on the short-lived local independent, Moleworth Records, was in melodic power-popmode, debut album Lovehappy was recorded in Bristol and released by Martin Whitehead's Subway Organization in August 1989, to rave reviews. Championed by John Peel, itshowcased their evolving "Wall of Guitar" sound, moving away from the tamer pop beginnings. Follow-up EP "Love In The Emptinesss" showed continued growth, the song constructions becoming more complex and layered, and when the group signed to Cherry Red in 1990, the single "Liar" began making waves in America, though the group somehow split right at this high-water mark, thankfully, the EP and single are both included on our expanded Lovehappy reissue.TRACKLISTAre You Happy NowColdKeep Me DownStubbornSee The Danger ShineEverything To MeIn My HairLove HappyLiarBlueVenusLove In The EmptinessBe My ReleaseCould There Ever Be

Primitives
Thru The Flowers