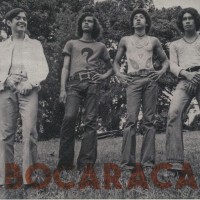 Incredible Afro-Latin rooted psychedelic rock and soul sounds from the Caribbean coast of Costa Rica! This 7-inch comprises historic studio material that was recorded during 1973 and 1974 in San José. It's a priceless and important document, a window to what was happening with music in the largely abandoned and forgotten province of Limon, where a musical revolution was cooking in the early '70s, and where Bocaraca was the hottest name.