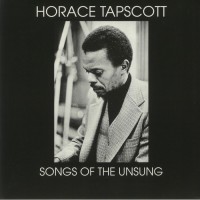 Tapscott, Horace
Songs Of The Unsung

Distinguished Los Angeles-based jazz pianist Horace Tapscott is probably best-known as the founder of the Pan-Afrikan People's Orchestra of PAPA, also known as The Ark, though he began his career as a trombonist, working with Lionel Hampton and others during the late 1950s. The 1978 solo album, Songs Of The Unsung, released in small number on pianist Toshiya Taenaka's Interplay label, features Tapscott alone on piano, delivering a superb set of freely interpreted jazz tunes, including an unfettered reading of Lester Robertson's "In Times Like These" and Cal Massey's "Bakai," along with two of his own heartfelt originals.

Winstone, Norma
Edge Of The Time