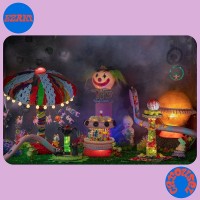 Ezrat is a simple twist of the lemon for followers of Ezra Tenenbaum's previous band, EZTV, who released two hook filled LPs on Captured Tracks and toured with the likes of Real Estate, Ultimate Painting, Jenny Lewis and others. Listeners can expect the same deliciously deployed power-pop hooks that recall British invaders or left of the dial new wave. New players are in the mix, plus some old faces, playing pop-inflected rock music that operates as both a mirror to our past and a strum-happy tunnel to the future. Written following a bout of heavy touring and breakup of his previous band, and amidst the degradation of multiple relationships, the songs that make up -Carousel- were culled from an obsessive trove of singer/songwriter Ezra's dozens over reel to reel demo recordings. Sounds oscillate from jangly meditations ("Turn the Time"), drum machine fueled heart pangs ("Picture Taker"), and the ethereal ruminations of a shut in ("Loud Sounds"). After tracking live at Brooklyn's Figure 8 Studios, guitarist Ezra Tenenbaum and drummer Michael Stasiak fleshed out knotty hook-filled arrangements at home with the help of a rotating crew of friends, including Kyle Forester (Woods, Purple Mountains), John Andrews (Hand Habits, Cut Worms), Michael Hesslein (Mail the Horse) and others. TRACKLIST SIDE A A1. Distortions A2. Loud Sounds A3. Picture Taker A4. Turn the Time A5. Yellow Flowers A6. Heavenly Highway SIDE B B1. Visions B2. Endless Holiday B3. Daylight Star B4. Leap Year B5. Moonlit Miles B6. Messages