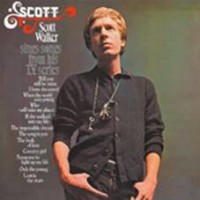 he fourth studio album by the American solo artist Scott Walker was released in June 1969. The album does not include original compositions by Walker and consists of performances of ballads and big band standards. The record is an accompaniment to his BBC TV series, the simply named "Scott", aired during Walker's self/described "wilderness years." Released between Scott III and IV, T.V. Series was a collection of songs Walker performed on the show re-recorded in studio.