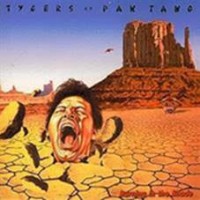 Tygers Of Pan Tang
Burning In The Shade (crystal Clear)

Vinyl reissue, originally - Crystal clear vinyl, limited to 500 copies. The Tygers of Pan Tang were one of the foremost New Wave of British Heavy Metal Bands and they hit the album charts running when their 1980 debut album Wildcat reached 18 in the UK charts. After three further albums with MCA, they recorded this album for Zebra Records in 1987. Burning in the Shade is the most melodic of their releases and features the line-up of Jon Deverill (vocals), Steve Lamb (guitar), Brian Dick (drums) with guests Steve Thompson and Phil Caffrey.