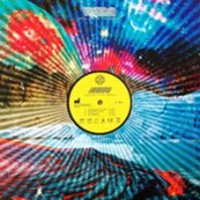 It was only a matter of time travel before this became inevitable. Coincidences of space/time anomalies and political outrage have led to a split LP between these two one man bands created by the same person. On this release, the two bands have opposite approaches to extreme music - progressive and regressive. If PSUDOKU's previous album "Deep Space Psudokument" had a third side, this would be it. On Report From the 10th Dimension, futuristic 70s progressive grind is once again consolidated with surf rock and electronic classical. Prepare for raging interstellar speed and dense musical information overload. For fans of NETJAJEV SOCIETY SYSTEM, O.L.D., BAL/SAGOTH and MAGMA. The PARLAMENTARISK SODOMI side is entitled Demo 2018 and is the first PS demo since 2007. This is 11 crude, straightforward and fast hc & grind & noise tunes partially recorded on cassette. For fans of SIEGE, RUPTURE, DENAK and ULCERRHOEA.