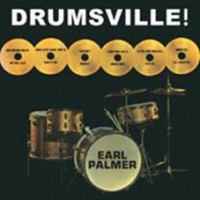 Earl Palmer the man behind the evolution of the backbeat from Jazz and R^B to Rock -n- Roll. One of the great figures in the New Orleans music scene and one of the most-recorded drummers ever. His highly dynamic drums style has served hundreds of hitmakers such as Fats Domino, Little Richard, Sam Cooke, Ray Charles, The Beach Boys, Eddie Cochran, Dinah Washington, Dizzy Gillespie, you name it. 'Drumsville' originally released on Liberty Records in 1961 features a selection of rare gems produced under his name. Twelve instrumental tracks based on lots of fat horn charts, reverberating guitars, grinding organs, and of course a full catalog of hyper-creative drums beats.