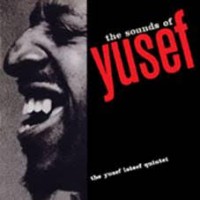 Recorded in 1957 and released on the Prestige label, "Sound of Yusef" features Lateef's quintet with Wilbur Harden - flugelhorn, Hugh Lawson - piano, Ernie Farrow - bass, and Oliver Jackson - drums. Lateef's aesthetic was a perfect mixture of hard-driving jazz and a variety of ethnic materials. Even though If compared to later works, "Sounds of Yusef" is still very much rooted in Jazz while the use of traditional ethnic instruments adds colors and flavors without really deviating from the American Jazz tradition. Lateef shines on both tenor sax and flute while the rhythm section swings hard throughout a varied repertoire including an airy version of Strayhorn's ultra-classic "Take the A Train" and a contemplative Lateef's original called "Meditation".

Riley, Terry
Music For The Gift