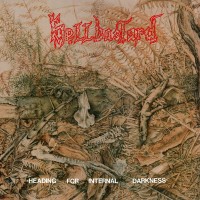 HELLBASTARD's milestone debut album "Heading For Internal Darkness" (1988) is finally available again 32 years after its original release date. The material was released on vinyl back in 1988 followed by CD version two years later. The 9-song release brings forth classic metallic crust & thrash & punk from Great Britain that is an absolute must have for fans of AMEBIX, ANTISECT, DISCHARGE, SACRILEGE, SLAYER and the likes. The CD is released in standard jewel case with slipcase and extensive 24-page booklet including the band's biography and history written by Scruff himself, liner notes by Woz, lyrics, and tons of gig and tour posters as well as never seen before picture from the band's archives! On top of that there is 6 bonus songs not included on the original version!

Despise You
West Side Horizons