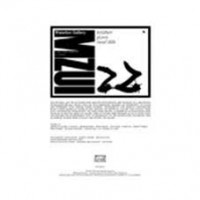 Originally conceived for a multi-media installation, the music contained in this album represents one of Lewis and Gilbert's earliest steps in their immediate post/WIRE period. With the band's break-up in February 1980, the duo began to take a more explorative approach through various projects (Dome, Kupol...). Clearly they needed something different and more open out.That's how they started to work on the Mzui multi-media installation, some sort of evolving work in progress that eventually took place at London-s Waterloo Gallery in August 1981. Joined by artist Russell Mills, the ex-WIRE duo built an imaginary space where all sorts of sculptures, found objects, ambiance sounds and audience reactions were components of the same multiple experience.Some time afterward Cherry Red Records proposed a recording project based on the mixing of the resulting tapes. The whole MZUI album, originally released in 1982, is about the notion of sound as landscape, and the soundscape as a guide to an extended form of listening and a unique aural experience. Not a very different concept than Brian Eno's ambient experiments of the same period, but less lyrical and more dark-urban oriented.For too many years out of print, finally digitally remastered, here-s the first vinyl reissue of this historical album. As for its 1981-s first release, the record comes packaged in a six pages 12@ foldable printed sheet with photos in a plain black sleeve, within a clear PVC cover. Ltd to 500 copies.

House Of Love
Shine On