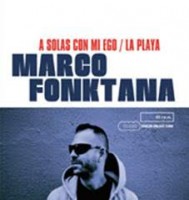 Marco Fonktana has more than 20 years of career and is a benchmark in Spanish hip hop scene!After more than 20 years as an artist, Marco Fonktana has released two new tracks on a 7" vinyl pressing, equal parts biographical and moments of reflection, without compromising his torrential sincerity that grows larger with each subsequent musical endeavor. If there's one thing that has characterized the Santa Coloma MC, it has been his continued search and shaking of the hip hop underground with his continuous evolution with music. Projects like Soul Divos or Aerolíneas Subterráneas showed that the union of rhymes with a funk band backing was not only possible but worked well. His solo projects: Al Volverte Hay Un Perro Detrás y Balas Perdidas, always maintained a high quality of exploration within the grooves, without forgetting his most old school look with the project of Hombres Bala accompanied by Sr. Zambrana and Weleló.TRACKLISTSIDE A: A Solas Con Mi EgoSIDE B: La Playa

Black Mouth
Lost In Heaven/get It Out