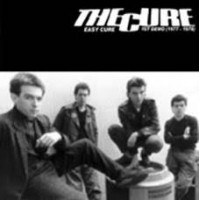 After winning a talent competition, Easy Cure signed a recording contract with German record label Ariola/Hansa on 18 May 1977. In September 1977, The new four piece band with Dempsey, Smith, Thompson, and Tolhurst recorded their first studio demo sessions as Easy Cure for Hansa at SAV Studios in London between October and November 1977. On 22 April 1978, Easy Cure played their last gig at the Montefiore Institute Hall before guitarist Pearl Thompson was dropped from the lineup because his lead guitar style was at odds with Smith-s growing preference for minimalist songwriting. The remaining trio were soon renamed 'The Cure' by Smith. This limited 7" of 200 numbered copies includes four tracks from that recording sessions, 'Meathook', 'Listen', 'Need Myself' and 'I Want To Be Old'.