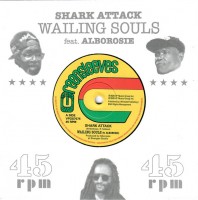 The Wailing Souls band teams up with Alborosie for a remake of their 1992 hit record "Shark Attack", with added verses from Alborosie. The song is a preview of the forthcoming "Back-A-Yard album", set for summer 2020 release and a companion dub album to follow later the year. An animated lyric video is in preperation.