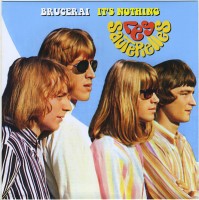 Here's a phenomenal Italian sung mod/beat/garage version of 'Ring Of Fire', dating back to early 1967! It's almost a miracle that such a superlative track remained unissued back in the '60s, since this is one of the very best Italian-sung recordings by Zurich-based combo Les Sauterelles! 'It's Nothing', the previously unreleased English-sung flip (from '67) would later be overdubbed in Italian and released as 'Aiuto!... Va Sempre Male?'. Nevertrheless, this original version in English is much more effective! Both sides were recorded by the classic early line-up of the band's first LP.

Squires
Going All The Way With The Squires (+7")

Electras
The Best Of Electras/scotsmen/victors