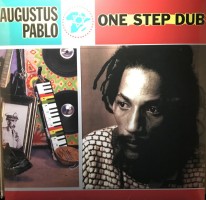 Punched out as the dub companion to Junior Delgado's hugely successful "One Step More" album, the release of "One Step Dub" couldn't have been better timed coming on the back of a hugely successful tour of Europe with Delgado. Recorded at Channel One, Tuff Gong & Dynamic Sound studios and engineered by Pablo, Soldgie, Steven Stanley & Tony Kelly "One Step Dub" included dub versions to some big hitters from Junior "Jux" Delgado including "Hanging Tree" & "Riot In A Juvenile Prison".

Pablo, Augustus
Africa Must Be Free By 1983