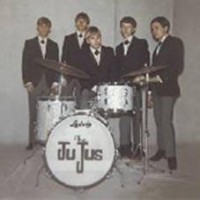 Back in stock! Swiss version. Compiled from the impressive mastertape collection of The JuJus lead singer, guitarist, and main songwritter Ray Hummel III. This all-official LP includes no less but 14 of the very best cuts from 1964-1966 ever recorded by this legendary '60s garage rock and roll outfit from Grand Rapids, Michigan. Highly recommended to anybody into '60s garage, the British Invasion, '60s beat, The Rolling Stones, Beatles, and folk-rock like The Dovers, Bob Dylan etc., but also to the surf and '50s rock and roll crowd too! Sound quality is better than on all other previous JuJus anthologies. Beautiful cover artwork, with ultra rare,never-before-seen photo material from the archive of Ray Hummel. It comes complete with extensive liner notes ] comments about each track by The JuJus frontman Ray Hummel on the photo packed booklet insert.

Ace Of Cups
It's Bad For You But Buy It!