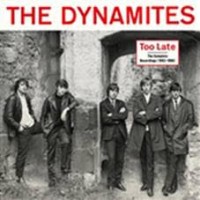 '1963-1966'- Limited edition 2LP box set by this legendary, explosive, for a while even leading Swiss '60s beat, garage rock and roll combo from Basel. Contains all their known recordings including different versions of 'Don't Leave Me Behind', and 'Someone Like Me', plus 4 unreleased tracks off two unreleased Dynamites 45s> 'Little Girl' (which later on became a hit for The Sevens as 'Little Girl I Know') and 'Tell Me Yes Or No' (first demo version), both taken from their unreleased 1965 Layola Records test-pressing only single, as well as 'Be My Own-&-Hello Daddy' from their unreleased first 1963 rockabilly acetate-only recording. The box is a quality, flip-open box, and even the two LPs are housed inside a very nice, laminated gatefold sleeve. Also includes a photo/history packed 40 page book entitled 'The Story Of The Dynamites', as well as reproductions of three vintage Dynamites posters from the 1960s! Highly recommended for -60s fans worldwide!

Chessmen
I Need You There/sad