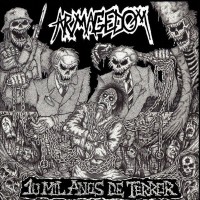 ARMAGEDOM is playing since 1984, the first participation was in the Brazilian compilation ATAQUE SONORO of 1985. The first LP SILENCIO FUNEBRE was released in 1986 with Javier on vocals, Eduardo on bass, Ricardo on drums and Barriga on guitar. Since that the band took part in other compilations and released new EPs and albums in LP&CD formats. This album was recorded in 2012 with Rodrigo Artorius on vocals, Javier on guitar, Claudinei on bass and Ricardo on drums. The song Poison of Death was originally recorded by Armagedom in 1991, in this version Felipe Abracax (Javier's son) does the second vocals. In this record, Armagedom also did a new version for the song Mensageiros do Final originally recorded in 1991. After the recordings of this album, Ricardo left the band. In 2014 Armagedom will complete 30 years, still playing and still doing new music as it shall be.

Framtid
Under The Ashes