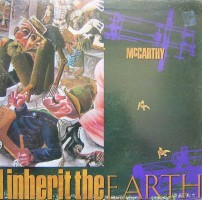 Originally released in March 1989, 'The Enraged Will Inherit The Earth' was the second of three albums from short-lived but influential agit-pop outfit McCarthy, featuring future Stereolab founder Tim Gane. It now gets a deluxe vinyl re-issue, including a ten-track bonus LP and a two-track 7" vinyl with two previously unreleased tracks.

Bachelor Pad
All Cock And Hash (the Very Best Of)