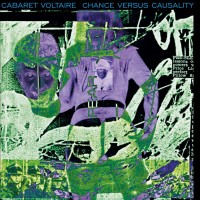 Chance Versus Causality is perhaps the most intriguing of all of Cabaret Voltaire's records. After a gig in Brussels in 1979 the band were approached by Babette Mondini and asked if they would score a film she was working on at the time. Cabaret Voltaire made the soundtrack without ever watching the footage, sent off the tapes to Holland, and then . nothing. The trio never saw the film and, after a limited release, it basically disappeared from the record. Now the Chance Versus Causality OST has been resurrected by Mute for its first proper release.