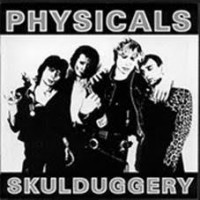 'Skulduggery' is of interest to fans of the Cook 'n' Jones sound, not least as it includes 2 tracks on which Paul Cook played & produced. Both sides of this oft forgotten single 'Be like Me' & 'Pain In Love' are featured on this collection. they gained the attention of Paul Cook & Steve Jones. During '79, the group found themselves without a drummer. Paul stepped in for the recording of the single as well as sitting in the producer's chair. The results (eventually released in '80) are two powerful slabs of musical muscle in keeping with the Cook 'n' Jones tradition.The band's New York Dolls /MC5 /Iggy influences. Crude in execution, but gloriously trashy, reflecting the variety of the DIY ethos which followed in the wake of the punk explosion.

Martin Savage And The Jiggerz
Time To Get Out