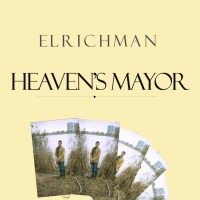 Steeped in both blissful stylistics akin to Orange Juice and Aztec Camera, as well smoother and proggier territory such as Roxy Music and 10CC, Toronto-based sophisti-pop artist Elrichman crafts unusual tunes with intricate arrangements. With songs satirical but filled with happy-go-lucky optimism, Elrichman functions as company for those who feel helpless in a time of abundance and consumption. Elrichman - the project of singer-songwriter and multi-instrumentalist Paul Erlichman is set to release its new album Heaven's Mayor. Following his work as part of the art-pop duo Goosebump (formally Germaphobes), Erlichman, who also plays in the jangle-pop quartet, Ducks Unlimited, recorded the new album with producer, Alex Gamble (Fucked Up, Alvvays). It's the first record under the Elrichman moniker since 2014's Young, Healthy, and Wonderful and finds further contributions from members of Hooded Fang (Jon Pappo), Weaves (Zach Bines) and Twisted Pine (Anh Phung).Recorded at Toronto's recently closed studios, The Hive, Heaven's Mayor looks to meticulously examine how to be honest with oneself in our strange postmodern world. Featuring lavish strings and woodwind arrangements, it's a versatile sophomore album that allows songs to celebrate their own sonic idiosyncrasies as much as they do their tales of consumption, helplessness and despair.TRACKLIST SIDE A A1. Cop on a Horse A2. You're Making a Big Mistake A3. On the Nose A4. Restrain Me SIDE B B1. Seeking Grey Skies B2. I Mostly Consume B3. The Man Cannot Say No B4. Burn It All Down