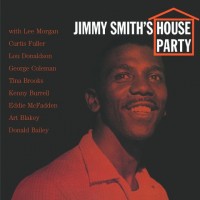 House Party is the fourteenth album by American jazz organist Jimmy Smith featuring performances recorded in 1957 and 1958 and released on the Blue Note label. Rudy Van Gelder used the Manhattan Towers Hotel Ballroom in New York City for recording sessions in 1957-1958, while he was still using his parents- Hackensack, N.J. home studio to record artists for Blue Note. House Party was the first of two Smith albums recorded on two dates, the second was Smith's next album The Sermon!, released in 1959. Van Gelder mainly used the ballroom for larger groups of musicians that would not fit in his parent's living room, or when New York was a more convenient location to record the artists involved.