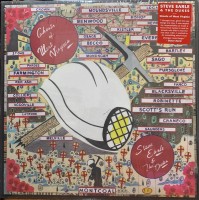 'Ghosts of West Virginia' is the eighteenth studio album by Steve Earl & The Dukes. It is an attempt to reach out to people who voted for Donald Trump and heal the rift. Steve says it's easy to think badly of Trump voters but to think of them all as being racist and whatever else is misguided. The album has the Upper Big Branch coal mine explosion, one of the worst coal mining disasters in US history, as its central theme.

Has A Shadow
Sorrow Tomorrow