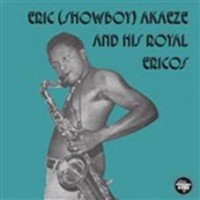 Eric Showboy Akaeze was former bigband leader who was hip on the Nigerian scene, which mostly happened around the main city of Lagos in the -60s and especially -70s after the military junta took over the reign and was keen to bring in more indegenious elements to the peoples allday lives and a new style of music emerged, Afro beat, mixing western rock and funk, rocksteady and soul with rhythms and melodies that clearly had an African heritage.

Hightower, Willie
Out Of The Blue