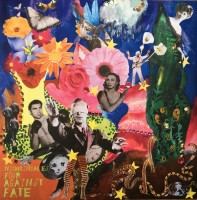 With Four Against Fate, the 11th album by Birmingham post-punk band The Nightingales, you can be assured of it's quality. Band leader Robert Lloyd claims that this is the only one of his albums, presumably including the one he made with previous band The Prefects, on which he doesn't skip any tracks when listening back to it. Like 2018's Perish The Thought, this is released on Tiny Global Productions, the first time the band have released two albums on the same label.