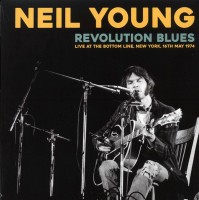 1974 marked the release of Neil Young's 6th solo album, On The Beach, and though the record sold poorly it has come to be regarded as one of his finest collections of songs, ever. Just a month after the recordings for that record wrapped up, and 2 months before its release in July of 1974, Neil played a solo set at the legendary New York City club, The Bottom Line. Featuring mostly cuts from that album, including an absolutely stunning take of "Ambulance Blues", this set is one of the finest live acoustic performances of Neil's career. Along with those great cuts from On The Beach there's also wonderful takes on the traditional "Greensleeves", his amazing CSNY track "Helpless", "Roll Another Number (For The Road)", and Zuma's beautiful "Pardon My Heart". Classic live Neil from one of the most productive, brilliant, and tumultuous eras of his career. Tracklist>SIDE A>1. Citizen Kane Junior Blues 2. Long May You Run 3. Greensleeves 4. Ambulance Blues SIDE B>1. Helpless 2. Revolution Blues 3. On The Beach 4. Roll Another Number (For The Road) 5. Pardon My Heart